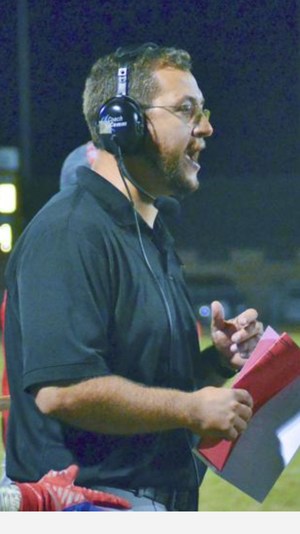 Mount Airy High School has named Jasson Adkins as the head coach of the varsity football team. Adkins comes to MAHS with 16 years of teaching experience and 19 years of coaching experience.

Mount Airy High School (MAHS) has named Jasson Adkins as the head coach of the varsity football team. Adkins comes to MAHS with 16 years of teaching experience and 19 years of coaching experience.

Adkins is a 2001 graduate of Appalachian State University (ASU) where he earned his Bachelor of Science degree in History, Secondary Education. In 1998, while attending ASU, he began his coaching career at Watauga High School. After graduation, he started his teaching career at Mooresville High School where he taught in the history department. In 2005, Adkins was selected as the Time Warner Cable Regional Teacher of the Year.

Adkins has been a member of six coaching staffs over his career serving in various capacities. For the past five years he has been the head football coach at East Wilkes High School and strength and conditioning teacher. As head football coach, his leadership transformed the Cardinals’ to be a top 10 1A program in North Carolina. Adkins’ success led him to be named the 2017-2018 NCHSAA East-West All Star Coach. He is currently on the NC Football Coaches Board of Directors and in 2015 was named NC 1A Coach of the Year and MVAC Coach of the Year.

Mount Airy High School Principal Sandy George expressed, “We are thrilled to have Coach Jasson Adkins joining our school family. He is highly thought of and respected throughout the athletic community. We are excited that he is now a Mount Airy Granite Bear.”

Chief Operations Officer Jason Dorsett was involved in the hiring process and noted, “The goal of our committee was to hire a candidate with great character, leadership, who excels in the classroom and will continue the tradition of excellence of Granite Bear Football at Mount Airy High School. Countless hours were spent reviewing resumes, meeting with community members, conducting interviews, and checking references to determine the best possible fit to lead our football program. On behalf of the interview committee, we are very pleased that Coach Adkins will be joining Mount Airy City Schools.”

“It is both an honor and a privilege to be chosen to help lead Mount Airy Football into its next chapter. This school and school system is widely known for high achievement, both athletically and academically. I look forward to continuing the tradition of success that coaches like Kelly Holder and Jerry Hollingsworth have established, as well as growing this program in the near and distant future,” stated Adkins.

MAHS invites players, their families, coaches, and the community to come out to Wallace Shelton Stadium on Sunday, May 6 for to meet Coach Adkins. The meet and greet event will start at 3:00 pm.

Adkins first season as the Granite Bear’s head football coach will be the 2018 season.